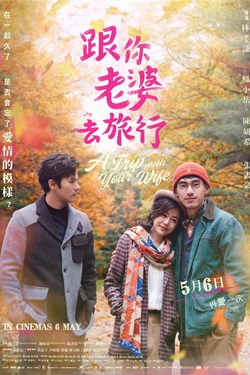 A Trip With Your Wife (Mandarin)

Ah Cheng and Ah Zhi were both roommates and buddies in college. Ah Cheng falls in love with a beautiful girl, Xiao Ya, from the guitar club. Ever the reliable buddy, Ah Zhi helps Ah Cheng to woo Xiao Ya till they become a couple. Years later, Ah Cheng now has his own business. But his business is in deep trouble and he needs to raise funds to save his company. Ah Zhi agrees to lend a huge amount of money to his old college buddy on the condition that Xiao Ya is to accompany him for a trip overseas. Ah Cheng desperately agrees, much to Xiao Ya`s chagrin who thinks that Ah Cheng prioritises money over her. As Xiao Ya gets ready to leave with Ah Zhi, Ah Cheng wonders what Ah Zhi`s ulterior motives are, and whether he should stop his love from leaving and lose her forever.